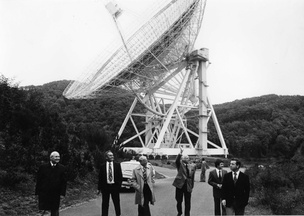 The areas of astronomy, extraterrestrial physics and astrophysics have played a prominent role in the history of the MPG. One of its presidents, Reimar Lüst, comes from this area and was able to bring the experiences and international contacts he accumulated there into the MPG as well.

After World War II the research landscape in the area of physics and astronomy changed dramatically. In the context of the Cold War, considerable funds flowed into this area, new research centers were established, a new international postdoc system emerged, and the number of researchers involved grew substantially. In Germany these developments were accompanied by attempts to regain access to international research activities. Through astronautics, new instruments, international collaboration and an increase in interdisciplinarity, from the early 1960s this area of science underwent a profound transformation. Some branches were integrated more strongly than ever in a larger scientific complex, among them many-windows astronomy, physical cosmology, extraterrestrial and solar system physics, and both the general theory of relativity and relativistic astrophysics.

Against the backdrop of technological innovations and the dynamics of the arms race during the Cold War, the profound understanding of highly condensed material played a key role in the dynamic developments in and transformation of this area of science. Such changes ultimately also influenced the forms and organizational structures of scientific work and triggered lasting changes extending far beyond the area of astrophysics and extraterrestrial physics.