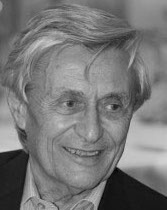 Hanoch Gutfreund received both his M.Sc. and Ph.D. in physics from Hebrew University of Jerusalem (HU), Israel. His main research interests include theoretical solid state physics, mechanisms of superconductivity, statistical physics, theory of neural networks, computational neuroscience, history of science and the history of relativity. In Sept. 2021, Gutfreund was awarded an honorary doctoral degree from the Freie Universität Berlin.

As a visiting scholar in the GMPG Research Program, Gutfreund explores the evolution of the MPG’s relationship with Israeli scientific institutions in the context of the establishment of at first scientific and then later diplomatic relations between the State of Israel and the Federal Republic of Germany after 1945.

Present academic and public positions held by Gutfreund include: Member of the Board of Managers of the Bloomfield Science Museum and Head of its Science Committee; Head of the Annual Young Scientists Contest (Bloomfield Science Museum); Head of the Executive Committee of the Israel Science Foundation; Member of the Acquisition Committee of the Israel Museum; Academic Director of the Albert Einstein Archives and coordination of many activities related to Einstein’s legacy worldwide.